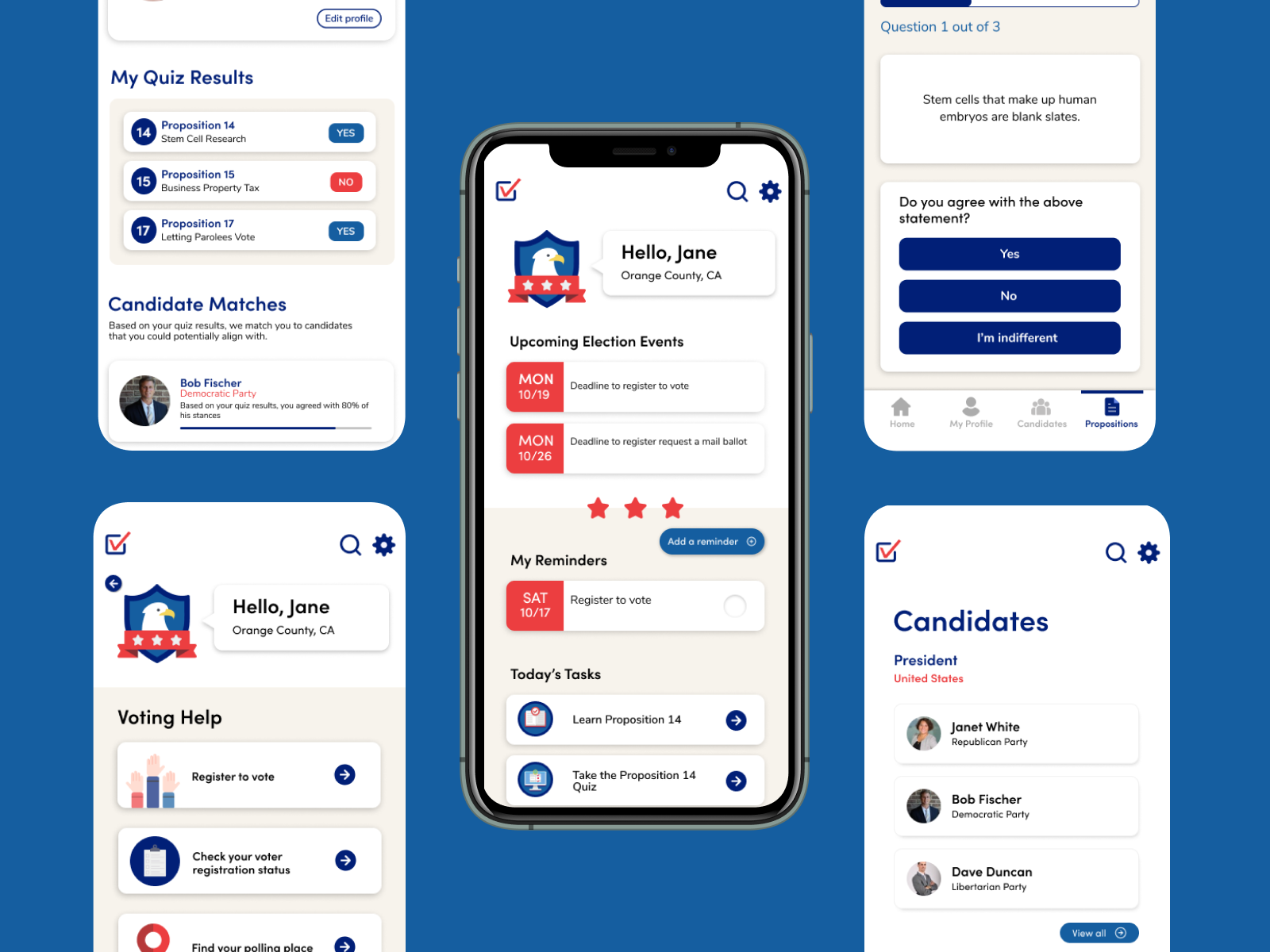 Over the course of several weeks, I worked on redesigning a previous project for an assignment in my UI/UX class regarding equity issues. I chose to refocus my attention to Votiential (which was a project that I worked on with a team a few months prior) for this project in order to fill in many of the gaps that I was unable to accomplish when I initially tackled it.

As I approached the redesign with a more formal foundation of UX knowledge, I was able to identify key areas of improvement for the project to further improve the voter experience.

Because of the way that propositions are explained on ballots, it can often be written to be misleading, which causes a lot of confusion for first-time voters. With so many important propositions on the ballots, it is important to make the most informed vote possible, which can be difficult if users do not know where to start on their research.

While many voter resources are out there, many of them are biased, which can skew someone’s unformed opinion. With so much information on the ballot, such as propositions and candidates, young and first-time voters often have a hard time deciding what and who to vote for without proper education beforehand.
‍
Through some exploration, I came up with some How Might We questions to aid in the research process:

From there, I created a problem statement that would frame my design decisions:

“Young voters in the US have a low turnout rate because voting information is often dense and difficult to digest, leaving many young people without a clear idea of how certain political agendas may affect their lives."

Thus, I worked towards creating a platform that would help voters be more informed about their vote by giving users the resources to learn about different political candidates and propositions.

When designing Votential, I had young voters and first-time voters, especially in mind. The idea behind the Votential was to be able to create a platform that young and new voters alike could turn to, as voting information is often dense and difficult to understand.

In order to understand the audience, I interviewed 3 users. Through these interviews, I was able to pull out several pain points that concerned the difficulties that they faced voting during the most recent election. I found that users felt like information about the propositions were often skewed a certain way, or written in a way that is misleading. All of the users expressed that they had to do some extensive research in order to be knowledgeable about the propositions, and some had even expressed that they only voted for the president because they were unable to find reputable information about the other candidates that were up for vote.

“Researching each of the propositions was annoying. I didn’t know if the information I found about the propositions were correct or if I’m voting the way that I wanted to vote. There’s a lot of bias out there and misleading information. It made it seem like taking a standardized test rather than voting.”
- Vivian Chung

As some of the ideation for this problem statement was already explored in the first iteration of Votential, I went back to those ideas to see how they could be applied in this new context. I took inspiration from sketches that my teammates and I compiled when I worked on this project a few months earlier, I pulled some key features that I thought could still be useful with the new information that I’ve acquired through user interviews. 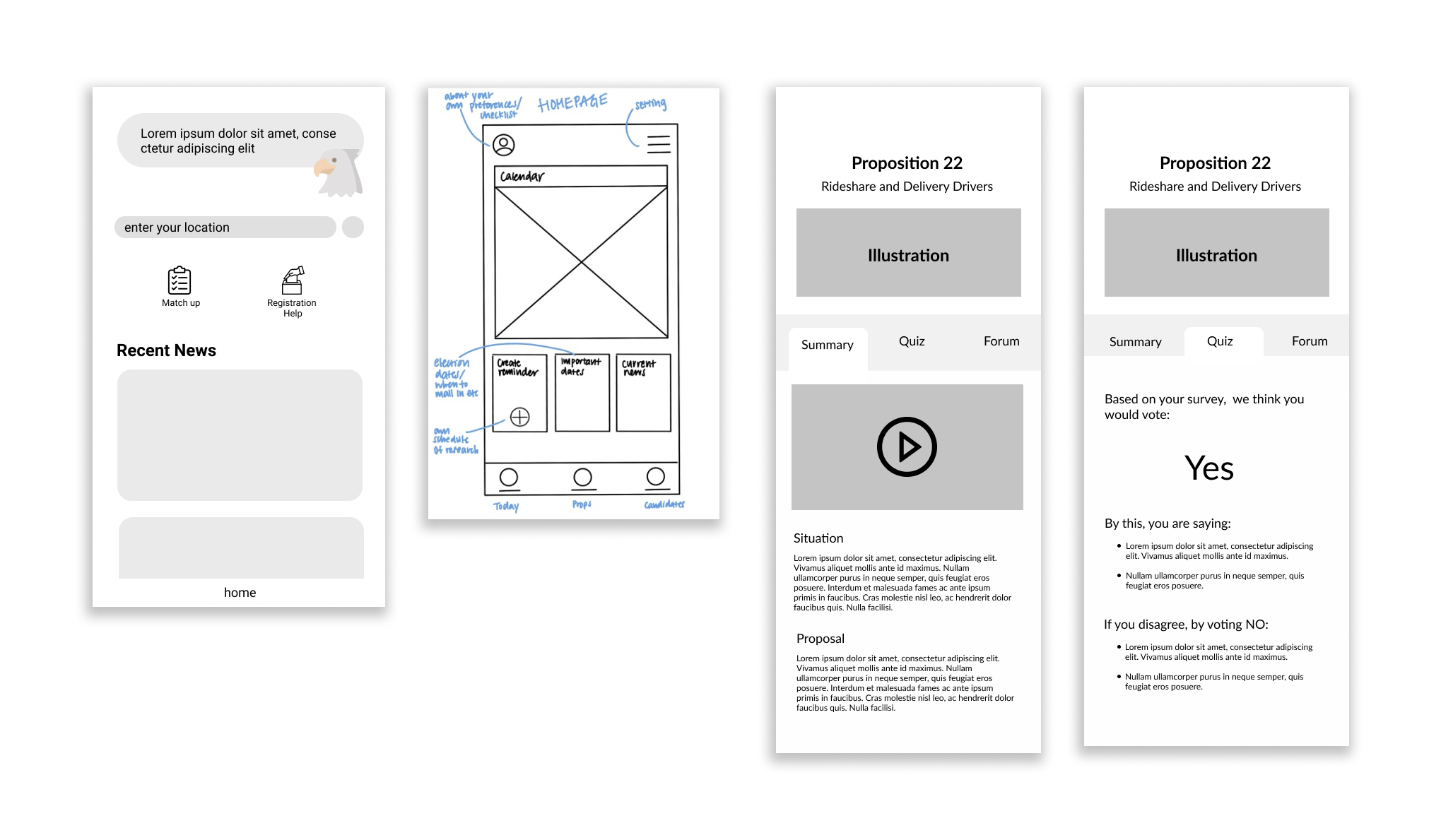 Compilation of some of our sketches

Some of our notable features that I saw that could be reused included a calendar to keep track of important due dates and events and a quiz to help voters assess their beliefs to see their positions on propositions and candidates. By mapping it out in an information architecture diagram, I was able to see the bigger picture of what the platform would essentially set out to accomplish.

In order to approach the pain points that were revealed in the interviews, several features were implemented to help users feel more knowledgeable about the candidates and propositions. 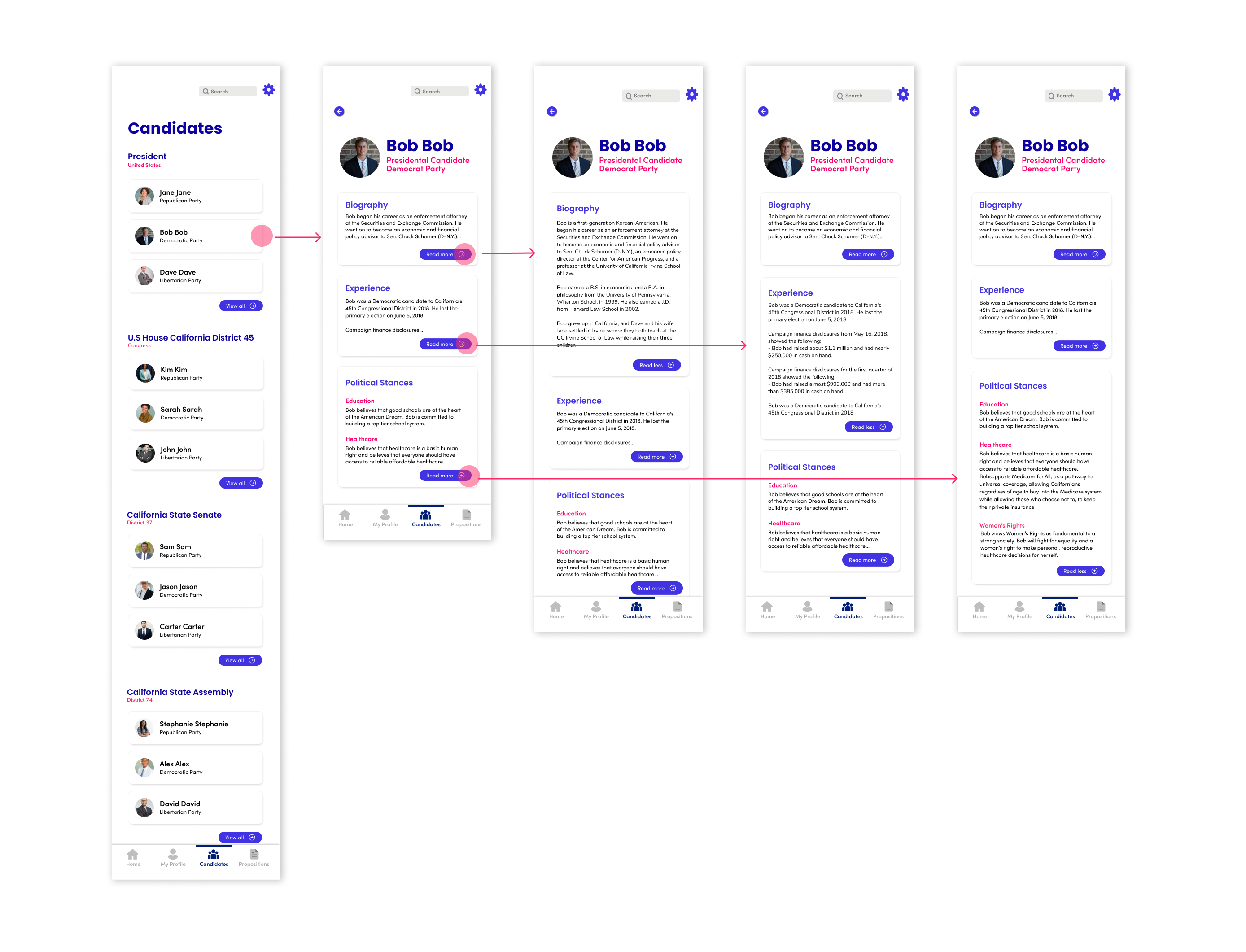 Flow for reading about a candidate

Flow for answering a quiz question 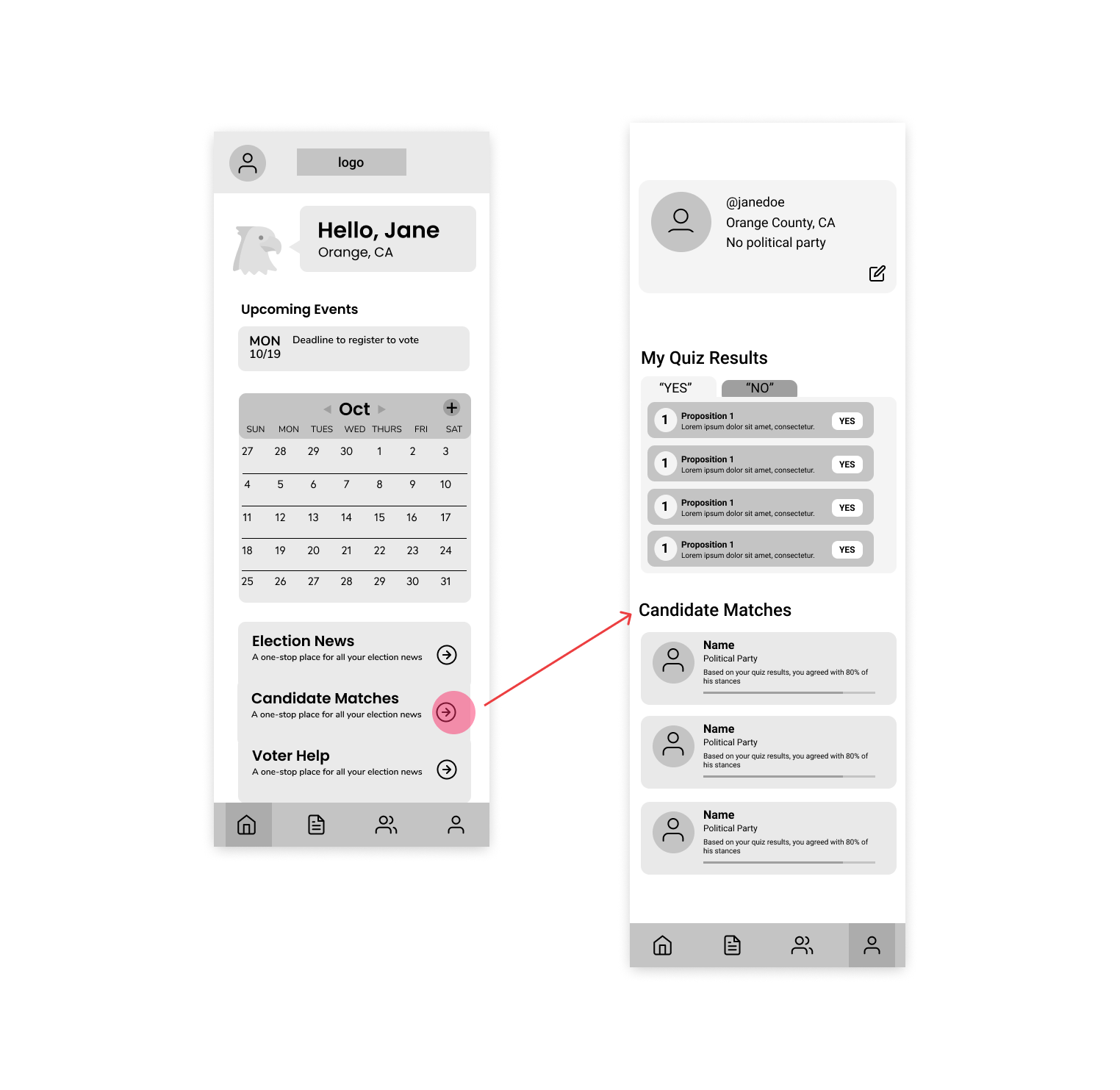 Flow for navigating to a candidate match

Besides the lack of user interviews in my last project, another big thing that my previous project was missing was feedback from usability testing. After finishing the project, my team and I did not know whether or not the design solutions that we came up with would be helpful or not. After conducting two rounds of testing with around 5 different users, I was able to pull out some key findings that aided in the reiterations of some of the designs:

1. There was some confusion with some of the language being used 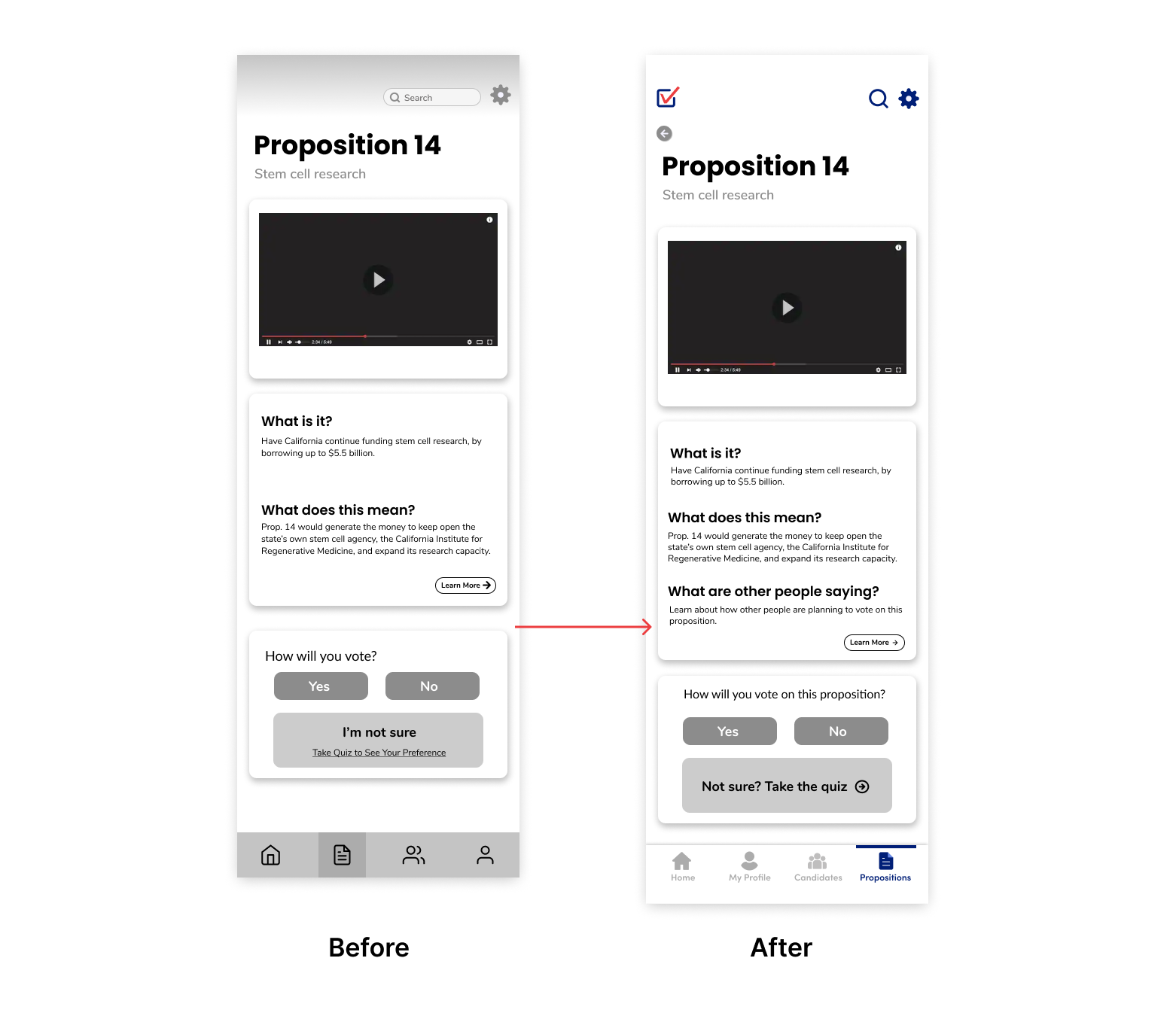 2. The graphic on the sign-in page was distracting 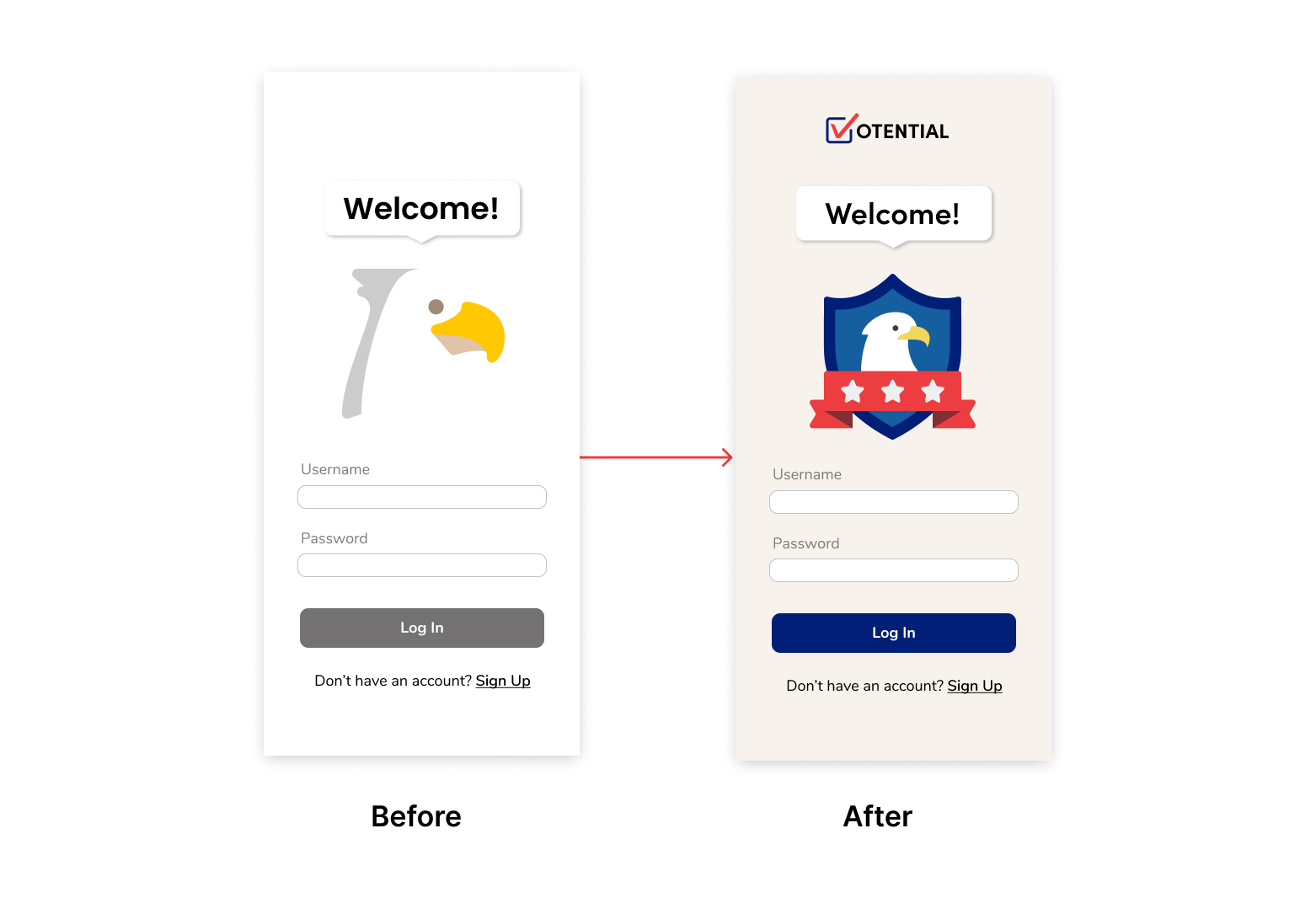 Solution: Removed the calendar feature and included a feature to add reminders instead 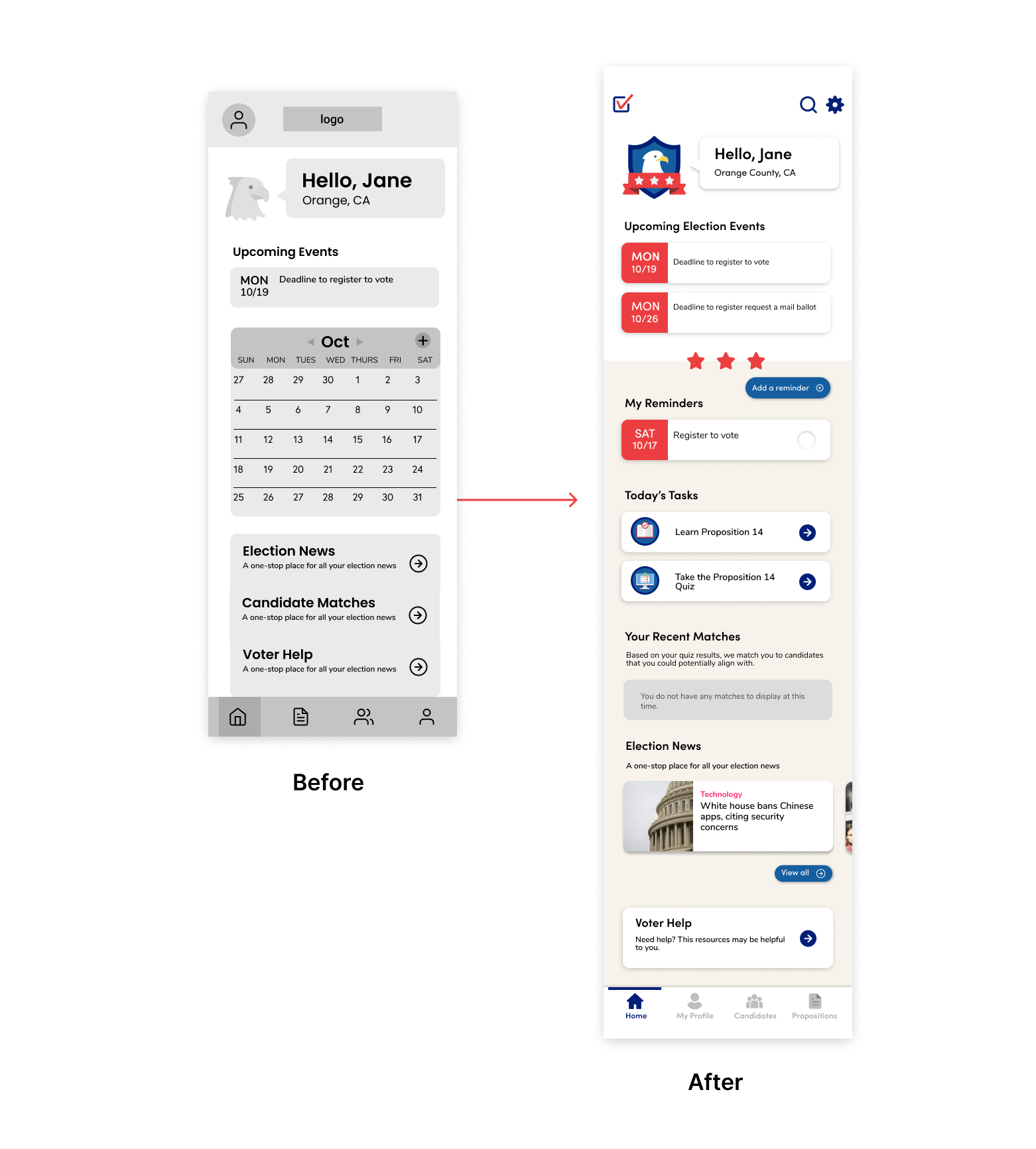 After user testing, came finalizing the designs. Throughout this process of finalizing all of the designs, I also created a design system in which my designs followed in order to create a consistent branding identity.

I took a clean and minimal approach, using the patriotic colors of red, white, and blue, but with a more modern approach. Both the red and blue served as the main accent color, with the off-white often anchoring the designs. 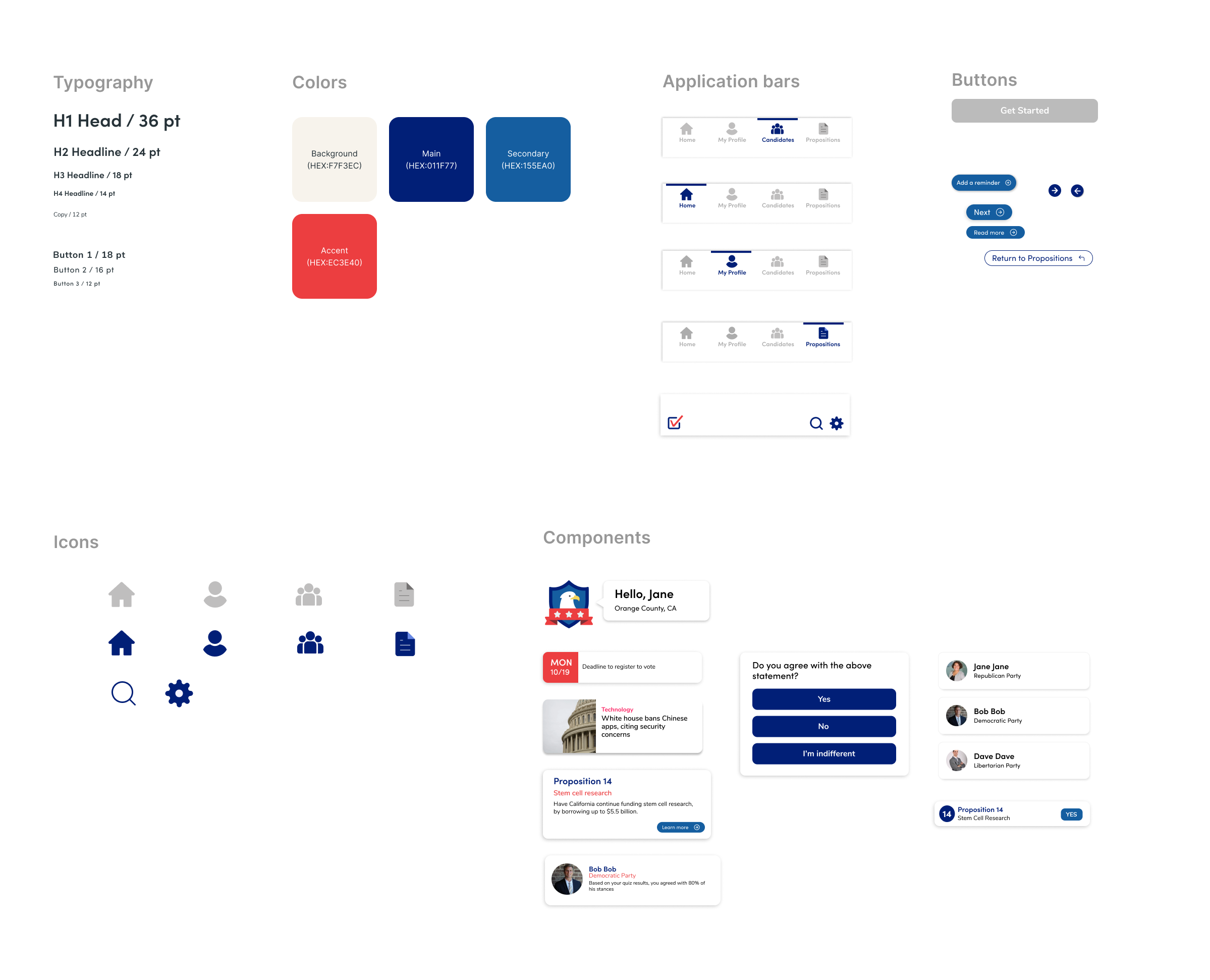 After receiving user testing feedback, I implemented changes in the design that will make the voter experience even more easier. Some of the other feedback included:

I also took all of these thoughts into consideration and implemented them in my iterations.

Walkthrough of the proposition quiz

Walkthrough reading about a candidate

Through this project, I was able to explore user testing in a way that I haven’t before. Like many other projects, there was also a time constraint that limited the amount of user research and user testing that was done. However, even with the limited testing that I was able to do, I learned a lot about the process and how valuable it is to the entire design process.
‍
Designing is all about iteration, and throughout the entire design process for this assignment, I felt that the designs have evolved through each interview and test.

Planning for the Next Election

After the changes that I made, there was a lot of improvement from where I initially started with the project a few months prior to where it is today. Even with all of those changes, I still feel like there is still room for improvement. If I had more time, I would definitely test once again to see if the revised designs were helpful, as well as spend more time refining some of the components within the designs.
‍
Even though this project was an extension of a project that I completed prior, I am glad that I was able to take this project and further improve upon it. After taking a look at it a few months later, I realized that there was a lot of room for improvement, and it was really interesting to see how it evolved when user interviews and user testing was introduced. It was always a goal of mine to revisit the original Votential project, so I am glad that I was able to do so with this assignment after acquiring a more formal UX education.